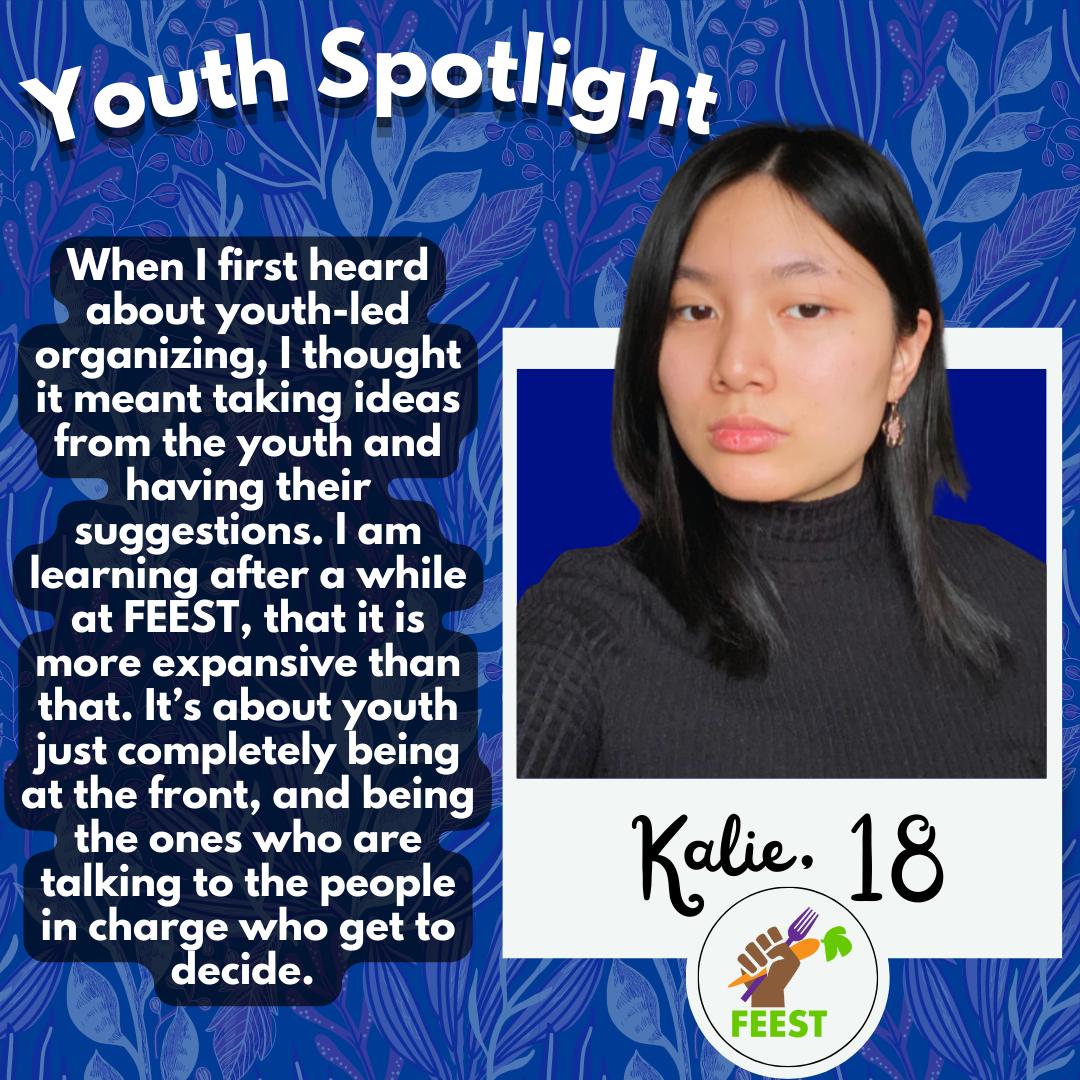 Earlier this Spring Dev, our Communications Manager, had a chance to talk with one of our Student Organizers, (formally known as youth leaders), Kalie (She/They/He)! Kalie’s favorite color is blue, they love  Gudetama, and recently graduated from Franklin High School, and our program!

Check out the full interview below:

Dev: Hi Kalie! I’m glad we were able to chat. I wanted to start off by asking, why did you choose to join FEEST?

Kalie: I decided to join because my schedule was a bit empty and I saw it advertised in advisory class. It seemed like a good opportunity because I don’t think I’ve ever seen a group centered around social justice yet. Other than FEEST, I can’t think of another program that was actively recruiting youth. Basically, FEEST ended up being my entryway to organizing for social justice.

Dev: I know since you’re graduating you probably get lots of questions about what school you want to go to, but I want to broaden that idea a bit. The next question is about your dreams. I would love to know what you dream or envision for your future?

Kalie: I haven’t mapped out anything yet and I don’t have an intended major at the moment. Because of that, I applied for computer science just to see if I would get into that major. I didn’t get in, but I’m fine with that because I don’t think that’s what I truly wanted anyway. One thing I do know is that I’ve participated in a lot of programs with adult mentors, and I feel like one day I want to become a part of those programs like FEEST and other non-profits that help younger generations. These experiences become a big part of young people’s memories and even lives.  At the same time, I wouldn’t want to limit myself to solely being a mentor for youth.  For example, I’m a part of Team Read– a program that tutors kids to help develop their reading skills– and I’ve been with them for four years. In this time, I have considered the idea of being a teacher, but concluded that it feels too limiting and not for me. However, I do like the idea of positively impacting future generations. I know education and social work is not a field known to have much financial turnout, so it is a complicated choice.

Dev: I resonate with that so much. I was actually in Team Read when I was in the 2nd grade and that’s how I learned to read! Look at me now – impacting future generations of young people. What I’m also hearing from you is that you want to create the same spaces that have been created for yourself as a youth. In the same light, What does youth-led organizing mean to you?

Kalie: For me, when I first heard about youth-led organizing, I thought it meant taking ideas from the youth and having their suggestions, and although that’s a really important part of it, I am learning in my time with FEEST that it is more expansive than that. It’s about youth just completely being at the front, and being the ones who are talking to the people in charge, the decision-makers.

Dev:  It’s amazing to hear how your idea has transformed during your time at FEEST! That’s beautiful, and I’m glad to hear it because there is a lot of “youth” organizing that happens that’s not actually youth organizing.

Kalie: Yeah, I feel the same way. They ask youth what they want, but then twist it.

Dev: Oooo. That’s a good point Kalie. What do you think are some issues that you see happening at Franklin right now?

Kalie: I think the main one that comes to mind is the burnout of students, which I feel is applying to everyone now. It’s more than senioritis. It’s the actual effects of capitalism and how everyone’s feeling the pressure to be successful. That feeling has always been there, partly fueled by the increasing pressure coming from parents. But especially in Seattle with rising house prices, rent, cost of living, I think it’s become a crisis for students,  so they really feel helpless; they feel like they’ll be stuck living with their parents forever. Which also makes me feel like some students are giving up their dreams.

Dev: Okayyy political landscape analysis! You’re not playing any games. Thank you for breaking that down so clearly. I’m glad that you named capitalism and the impact it’s having on your family, friends, and the world around you. The next question I wanted to ask you is: Why does Food Justice matter to you?

Kalie: I feel like if students really did have good food that was free, it would be such a game changer. People could be sitting at the same table together, eating the same food, sharing a joyful experience. Lunchtime would mimic the familial setting and family-style dinner where everyone is enjoying the same food. Instead, everyone is either bringing their own food from home or eating unsatisfactory school food, which could still be a bonding moment, but it’s definitely lacking in comparison.

Dev: Yesssss I understand. It’s all about community connections and sharing that moment with others. A similar but different question,  Why does Mental Health Matter to you?

Kalie: It’s a long story, but I wasn’t self-aware. I wasn’t self-aware of my own mental health until I entered high school. I didn’t know how I was doing until I realized in 8th grade that high school is really important. It kinda went downhill from there, 9th grade I was realizing more things about myself.  If you’re a person who has depression or other mental health disorders or conditions, that changes your whole life and could decide so many more outcomes or choices that you can regret so much later. I feel like a lot of people don’t understand until they’re that person experiencing that situation.  Now, I feel like the surface level of mental health isn’t hard to talk about. Everyone can talk about how stressed school makes them. But you don’t really talk about more personal things, such as having bad family issues or suicidal ideations, unless it’s with your friends. Friends are depending on each other for those kinds of things, yet we’re not able to express that in front of adults or parents as much.

Dev: I related to your story deeply, thank you so much for your vulnerability, Kalie. It was an honor to speak with you and learn more about how you think schools can be transformed for the better!

In case you didn’t know, FEEST is in the middle of our End of Year Donation Drive! We are raising funds to continue our work in the Highline & Seattle Public Schools District, and hope to reach 100 donations by 2023.

If you wanna support:!

🟤  Us getting closer to realizing our mission, vision, and values for a better world for working-class youth of color and their families 🏡

Donate today! All size donations are meaningful to us, there is no amount that goes unappreciated.

Editors Note: This interview was conducted in the Spring of 2022, since then Kalie has graduated from Franklin HS and has now started college! At the time of publishing this, Kalie intends to pursue the Education, Communities, and Organizations major at UW. As of recently, Kalie has joined the Participatory Budgeting Project team in Seattle– and found that the work personally fulfills them. Please take the time to learn about the Participatory Budgeting process by google searching those keywords with Seattle attached, checking out the PBP website, or by checking out the youth group of PBP @seattlepeoplesfellowship on Instagram!