To top off the end of 2015 we held epic cultural celebrations at Evergreen Campus and Chief Sealth. Youth brought in recipes from home, ingredients near and dear to their hearts, and shared important parts of themselves with their friends and FEEST fam.

With food from India, France, the Philippines, Mexico, US and more, our youth made a feast to remember.

It was on point. And a perfect way to celebrate ends and beginnings.

Here’s what our media interns reflected after such great FEESTing.

Culture. It means something different to everyone. To many, it can mean your identity. As you know Christmas is right around the corner and not everyone celebrates it. Instead of having a Christmas dinner, FEEST decided to have cultural dinner. With this dinner, we came together as a diverse community and created cultural dishes from our cultural. From a freshly baked quiche to falling off the bone chicken adobo, FEEST had a feast. About four groups of four worked on the dishes they had chosen for themselves. Each group worked together to make the dishes they decided they knew best.

When everyone started cooking there were people crying and there were people running around. Smoke filled the room and people were huddled together in corners.  Sounds bad but it is not! People are chopping onions and people are running around looking for seasonings. The salsa and chips team were frying their chips. Groups were discussing what the next step in their plan was. So yeah it might’ve seemed chaotic but it was a good chaotic. The kitchen was warm and it smelled awesome, people would peek in everyone now and then, some would even decide to stay. It was amazing seeing everyone cook dishes teach or learn more about the dishes they were creating.

When it was time to eat FEEST broke an old tradition we had, instead of eating at the dinner table, we ate on the floor. To me, it felt less formal and more intimate in a way it was like we really were a family for a moment. People sat together eating and laughing less worried about manners they were just themselves. That night it felt like what we came in worried or stressed about was entirely gone that moment. We had fun.

This week at FEEST we asked our youth to suggest cultural foods to make before we went off to break. We ended up making fried cheese sticks, lumpia, and risotto. They were all huge hits even though slightly modified FEEST style. All of our dishes were led by interns and regulars at our dinners.

While we shared cultures from around the world at our dinner, we also tried something different by eating on the floor. We found that we all felt much closer than sitting at a table. We all talked and were sitting with different groups of people and were a tiny bit out of our comfort zone versus sitting at the long table with the same people we always sit with. We also learned more about different cultures since this is a shared tradition in multiple places around the world.
It’s safe to say we might keep it around. 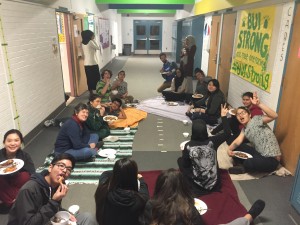 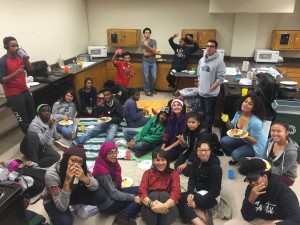