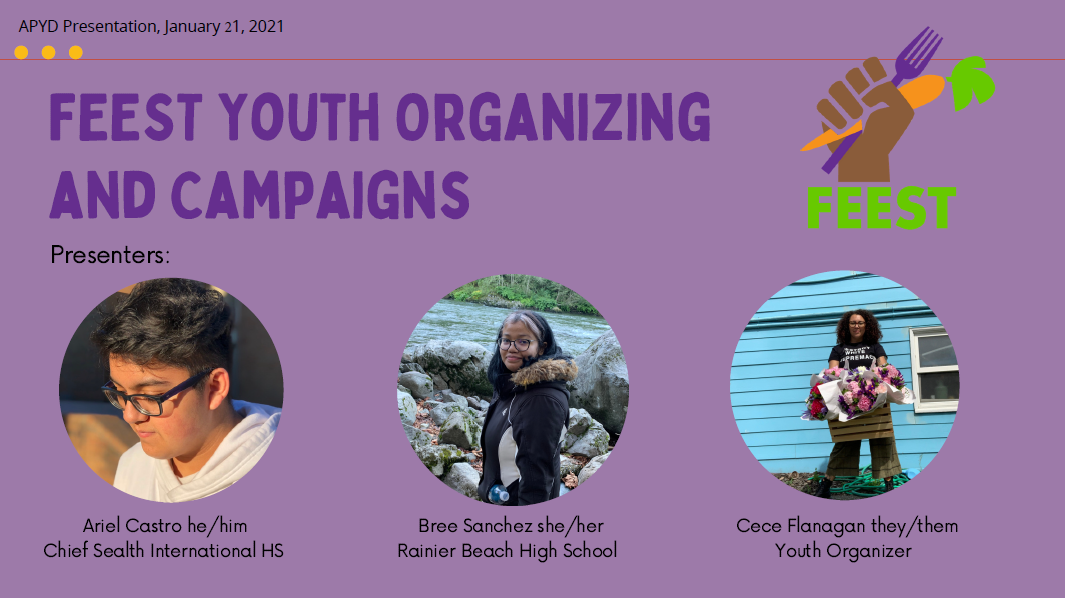 Congratulations to Ariel and Bree! These two FEEST youth leaders led a powerful webinar about their experiences with food justice organizing. The webinar was attended by 93 students from the Washington COVID-19 Response Corps who are working across Washington state to address food insecurity. Here’s what they had to say.

What are your experiences with school food?

Bree: As a student, I’ve had a lot of bad experiences with school food. Being a student itself comes with a lot of different mental health barriers and the lack of motivation. When I was in elementary school, things got difficult in my household and my mother was no longer able to pack me school lunches. When I tried eating school lunch, I was often made fun of for not being able to afford “good food.” I never realized how much bad school food was normalized.

Ariel: I originally didn’t know what food justice was, and didn’t actually know I could be a part of making change in my community for the better. One of the things that made me realize how much school food impacted students was when I went out to lunch and all of my friends were talking about how non diverse the food was, that it’s always pizza and burgers, and that’s why we constantly ate off campus. When I learned about FEEST, I realized our voices needed to be heard and that we had the power to include more diverse foods on the menu.

At FEEST, youth are at the center and they should be in charge of coming up with solutions. What makes a campaign successful?

Ariel: One of the main steps to building a good campaign is to have the people most affected by the issue find the source of the problem and come up with solutions. You should always educate yourself on what the issue is and talk to people around you. Make sure you’re asking your community what they think and how they think they can solve the issue. A lot of people think they have to work on it by themselves. Make sure you’re talking to people around you about how you can help each other in order to build a solid campaign team.

Bree: Educating the community is another key point when it comes to campaigning. It’s important to make sure the community is aware of the problems going on so that we know how we can tackle them. Reaching out to the community and other organizations to help is essential as well. Base-building and networking are really important. We must find people who support and who are down to campaign alongside so that we can build power together. There’s power in numbers, and we should let it be known that anyone can be a part of this fight.

Here’s an example of how students identified the problems and solutions for improving school food.

And we have had success in our collaboration with the Seattle and Highline school districts to make some progress on those goals.

How can allies support campaigns when they aren’t a part of the community being affected?

Ariel: Community building is something that really matters when building a campaign. Talk to them, even if you’re shy. Make sure you have a connection. If you talk to people, there will be people who will talk back and be interested.

Bree: I feel like an important part of this is listening. For me personally, I’m Black but I’m not Black passing. I consider myself an ally because I don’t go through the same issues as someone with darker skin color might go through. So when it comes to speaking on stuff like that, my job is to listen — it’s to listen to their experiences and ask “What do you need? How can I support you?”

What advice would you give to other young people who want to address food access and start organizing in their schools and communities?

Ariel: Research on things. If it’s an issue you’re unsure about, make sure you’re educated on the problem and do some research on what people in the community think about the issue. Brainstorm ideas around solutions, reach out to friends and see who’s willing to help you meet goals, maybe start a club at school, reach out to organizations. You can contact FEEST and we can help you with issues you’re trying to solve.

Bree: Know your audience. The way you talk about something, the way you present food insecurity to younger people is not the same way you’d present to your grandparents or an older generation. A lot of the time it’s not about what you say, it’s about how you say it. Don’t give up and know what you’re fighting for – that’s what will keep you going. You may not immediately see the fruits of your labor, but don’t forget what you are fighting for.

Every school year, FEEST supports 32 youth leaders to become powerful food justice organizers through analysis building and skill development. We are so proud of Bree and Ariel for giving such an insightful presentation, flexing their public speaking skills, and sharing important knowledge with their peers.